So I have always been looking for a way to check my temps through my phone along with controlling the grill. When I have Big Green Egg, I used a Cyber Q with limited success. I also tried the Flame Boss, which worked much better and kept it when I bought my Traeger. I bought a thermo works unit but it doesn’t work well.

I found this device called Meater, which is simple and after getting a bad unit, it worked pretty well. It’s very simple, just a probe with both temp sensors and Bluetooth enabled with an extender. On my last cook, the ambient temp in the grill was very close to what my Ironwood was displaying but they both could be wrong!

What I really like and wish the Traeger had in their app was an estimated time for the cook and it tells you when to pull it for resting, which will bring it to temp. Plus it sets temp by type of meat, not a big deal but it’s all there.

Is it worth it? If I still had my Pro 22, I would say yes. I will use it for times like tonight when I’m cooking steaks and some users want it done differently. I like that it’s just a probe but it won’t work on small pieces of meat, it has to go in so far as not to burn of the internal temp sensor. The charging case has to be near it but it has magnets. I attach it to The side of pellet hopper. This gives it extended range. I have lost connection but only a couple of times. There is a Wifi option but I haven’t needed it or looked into it.

That's pretty cool and this is the first time I've heard about that model. Not a bad price either. Check out the fireboard, it's more expensive but similar features. It also has a neat data logging feature that you can easily share with others on the web. 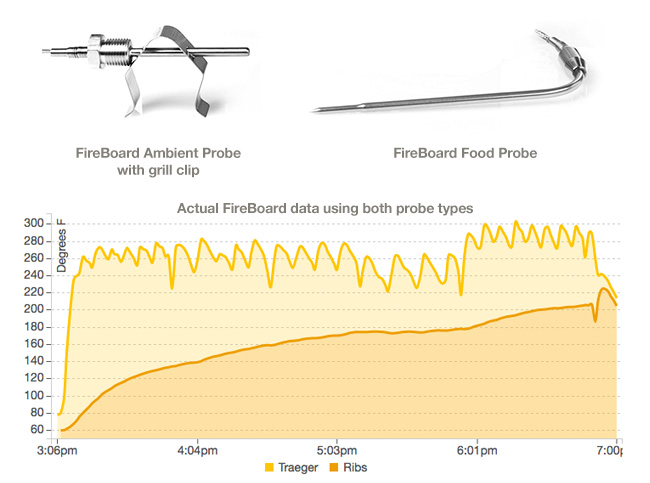 Is anyone using the Fireboard thermometer? Traeger should take a hard look at these guys and acquire the company to put their technology into the Traeger controllers. I think it's cool it works with Alexa and being able to share your data during the cook is awesome! The downside is it's a bit...